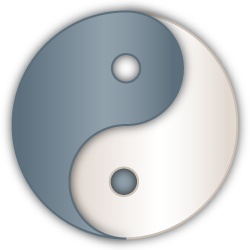 The origins of Tai chi chuan are not clear.  It was most likely developed in the Taoist monasteries over a period of several hundred years.  It clearly embodies Taoist philosophies and reflects the importance of balance between man and nature.

Tai chi chuan is most commonly attributed to one Taoist monk, Zhang Sanfeng (Chang San Fung) of either the 12th or 15th century (depending on the source).

One version of the story describes his learning this form, in a dream, from the Yellow Emperor. The next day he apparently went down the mountain where he defeated a hundred bandits in combat. Another version describes Zhang Sanfeng observing a fight between a snake and a crane. Zhang saw the attacking and yielding strategies of the adversaries as an embodiment of the principles of yin and yang, and developed his martial art based on the same principles. A third version has Zhang developing tai chichuan over a period of many years based on his understanding of the other martial arts practiced by the monks in Shaolin or on Wudang.

These stories were popularized in the early part of this century and were the result of misinformation and the desire to connect the art with a more famous and ancient personage.

The Art was only taught to members of the Chen clan until a promising young outsider named Yang Luchan was accepted as a student in the early part of the 19th century. Yang Luchan (nicknamed Yang without enemy as he was reportedly a peerless fighter) modified the original Chen style and created the Yang style of Tai chi chuan, the most popular form practiced in the world today.

When Yang Luchan first taught in Yung Nien, his art was referred to as Mien Quan (Cotton Fist) or Hua Quan (Neutralizing Fist). While teaching at the Imperial Court, Yang met many challengers, some friendly some not. But he invariably won and in so convincingly using his soft techniques that he gained a great reputation. Many who frequented the imperial households would come to view his matches. At one such gathering in which Yang had won against several reputable opponents, the scholar Ong Tong was present. Inspired by the way Yang moved and executed his techniques; Ong felt that Yang’s movements and techniques expressed the physical manifestation of the principles of Tai Chi the philosophy. Ong wrote for him a matching verse:

Thereafter, Yang’s art was referred to as tai chi chuan and the styles that sprang from his teaching and by association with him was called Tai Chi Chuan.